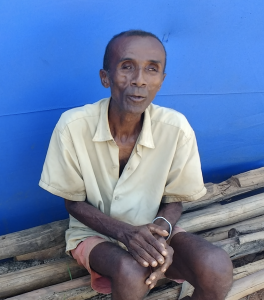 One of Miandrivazo’s residents told us how she had called out to her husband but he was hit on the head as the water gushed in. His son grabbed his hand, shouting “My father is going to die.” and dragged him away until they were safe from the waves. The woman carried her mother in law to safety on her back and so they were able to save their lives but lost all their possessions.

Cyclone Ava made landfall on Friday the 5th of January. With winds still gusting at 90mph 3 days later, flooding in many areas caused extensive damage.

Miandrivazo which sits on the Mahajilo river, 220 miles west of where the cyclone hit was several metres under water as the river burst it’s banks. The mayor there told us that over 300 houses collapsed and 5729 people were homeless in his area alone.

Further upstream, in Angodogodona the raging torrents completely destroyed the village, leaving 64 families homeless, so it was here that HoverAid set up a distribution centre to give out the supplies that you generously paid for.

The people sought shelter in hastily assembled huts made from what they could scavenge from the remains of their village.

Your donations meant we could give them utensils so that they were able to collect water & cook & eat. Your prayers brought hope.