Jean-Baptiste’s story is now one of hope.

Hope was barely a glimmer. But Jean-Baptiste’s deep brown eyes are bright. 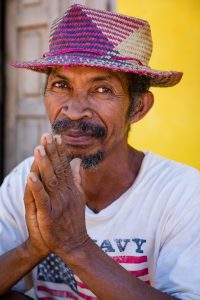 Home, crops and livestock decimated; planting season passing fast; debts to mercenaries and landlords outstanding; and the menace of bandits looming; there was every reason for despair.

Yet this village elder shouldered the responsibilities with a composed confidence. It was clear why the residents of Andengondroy had nominated him to lead them through their greatest crisis.

We met in the centre of Ambato Boeny. Behind us in a low hall at the edge of the football ground, 40 refugees from Andengondroy sheltered, surrounded by the meagre possessions they were able to carry as they fled their village.

Two weeks before, Jean-Baptiste had woken in the night to find water lapping at the feet of his bed. The rain of the last week had cleared, the incessant drumming on the thatch roof replaced with a low and sinister roar that surrounded the small house.

Outside, the moon illuminated the horror of what was going to happen. A dark sheet of water stretched to the edge of Jean-Baptiste’s vision. Trees and rooftops are the only feature above the current. Around his legs, the force of the water’s pull is already evident. 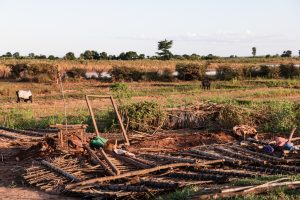 Waking his wife and two young children, they clambered together onto the roof of their house. Around them the river rose fast.

For half his life the 60-year-old had lived and farmed in the small village of Andengondroy. Never before had he witnessed a scene like this. He knew they needed help.

Phone calls to the nearest town of Ambato Boeny bought the promise of a rescue boat for the price of $70. They waited.

At 8 o’clock in the morning, with the river swirling around the rafters of the house, their huddled prayers on the roof were answered. Paddling hard against the current, a large canoe approached the tiny thatched island. After paying the young men at the paddles, Jean-Baptiste, his wife and two children were allowed to board, where they directed the canoe to collect 16 members of the extended family and their 7 neighbours.

Heavily laden with people and possessions, the canoe began the treacherous return journey to Ambato Boeny; 10 miles of water, chocked with debris and the corpses of livestock. A strong wind catching at the paddles. Lethal eddies sucking at the boat. Live cattle, paddling for higher ground lunging in panic at the canoe.

While his family and neighbours shook with the terror of the voyage, Jean-Baptiste’s eyes lingered on the tiny rooftop that was his home and his life. What would they all eat now? Where would they live? How would they replant? 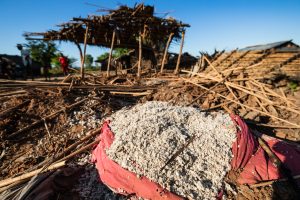 2 weeks later, with the waters receded, these questions still plague him. His plan, an improbable one but the only one available. Under his coordination, the refugees at Ambato Boeny walk each morning to Andengondroy to reconstruct the lost homes before walking back at night. Once houses are habitable, the residents need not waste hours travelling each day and will turn their attention to replanting.

But time is fast running out. Just two weeks remain before the planting season is over. The reconstruction is behind schedule. Key timbers in the housing frames have been washed away and replacements cannot be found. The bandits that had plagued their village’s success now look to profit from its affliction. The mercenaries hired to protect the village are overdue payment. To feed the children, the refugees have been forced to cook with the last of their planting seed. And the fields they hope to replant lie deep with sand.

For Andengondroy, hope was barely a glimmer. And yet, the refugees still find reasons to smile; spirits galvanised by Jean-Baptiste’s determination and belief in the future of his community. 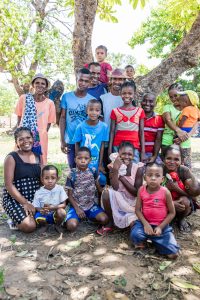 This extraordinary resilience in the face of crisis has been evident across all our flood relief work on the Betsiboka river. As with others suffering along its banks, HoverAid has come alongside this courageous community. With your giving, we have been able to offer food and seed to the village of Andengondroy and 3 neighbouring communities suffering similar devastation. Homes have been rebuilt and the refugees have returned. The fields have been cleared and replanted. And at a new site on higher ground, the village school is being reconstructed with a flood resistant design.

A month after the worst floods in living memory, through your support, a future grows once more in the fields and homes of Andengondroy.