We no longer suffer alone.

Arriving at the villages of Mangabe, barefoot and caked in mud, the HoverAid survey team prompt surprise, curiosity and relief in various measures. The residents have had no contact with the outside world since the day of the flood. Saturated roads and swollen rivers, deemed impassable, have locked these communities in. And so, after the initial shock, the significance of Peter and Tantely’s appearance sinks in. The message spreads, “we no longer suffer alone”. 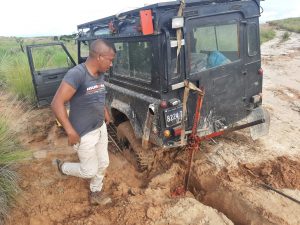 Serving Madagascar’s isolated communities requires a particular set of skills. Skills that are tested to the limit in times of flooding. A simple drive can become a fiendish logistical exercise. Hovercraft, must negotiate perilous landing spots and rivers choked with debris. And with phone masts down, accurate information is almost non-existent. In these moments, the best solutions are the simplest. Such as taking off your shoes and trudging through the mud.

Reaching the stranded communities at Mangabe has demonstrated the severity of need in these riverside settlements. With residents struggling to feed themselves and their families, repair work is slow and the opportunity to replant is quickly passing. 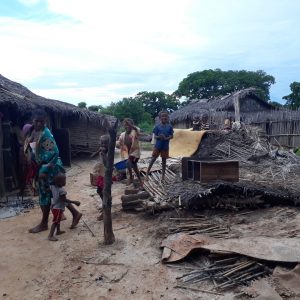 With the river now navigable from the town of Maevatanana we are loading canoes with rice – bought from local vendors – to supply the affected villages and so releasing the community’s precious time and energy to be spent on the task of rebuilding. A survey will also be conducted on the so-far inaccessible far river bank. The next day we will return with seed to plant a future and household essentials that will offer a dignity with which to approach it.

But the falling water levels which allow access to the brave canoe captains also hail a new phase in our response to these devastating floods. Having catered for emergency relief and rebuilding we can hand over our reports to the authorities for continued support of the residents of Mangabe. Meanwhile, our attention must turn to those who remain unreachable. 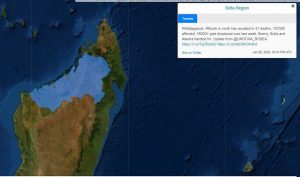 rther north, in the mountainous Sofia region, continued rainfall has halted all relief efforts and roads are officially closed under the national state of emergency issued by the government. Now, the pause in the rain has prompted the military to open road access to the region where the absence of reports from communities in high risk landslide and flooding locations is an ominous sign.

With your support we can push-on northwards to serve those whose silence is all too loud.