Celine is an example to us all – please help us support her community.

Celine is not used to an easy life. In January 2000, she moved with her husband to Mangabe, northern Madagascar. A fisherman, he had dreamed of owning land next to a river in which to make a better living than they had from the lakes in the capital city. 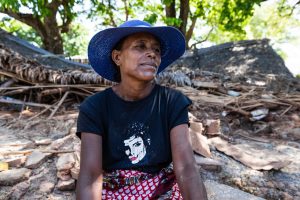 In March 2000, he was dead from a misdiagnosis.

For the next 20 years, Celine has had to build that life in Mangabe by herself, never remarrying and raising their two children as well as 3 nieces and nephews that her relatives in Antananarivo could not afford to raise.

For 7 years she has lived in a thatched house on top of the ridge between the lake and the river.

Now she sits outside its ruins.

Two weeks ago, with a roar like an aircraft, the river burst its banks and began to climb fast up the ridge. The rain was relentless and from the other side the lake swelled. As the waters met around her house she gathered the onion seeds that provide income in the dry months and made her way towards the church on top of the hill. Around her legs the water climbed as she pushed through the storm. In the chaos she had forgotten to move the pile of firewood that stood outside her house. 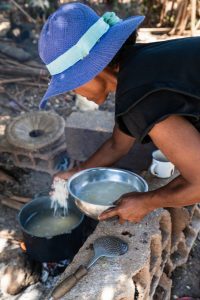 Heart beating fast and soaked to her bones, she made it through the doors of the church to join the mass of cold, scared bodies that packed the place.

The next morning the rain has stopped but the flood is too high to leave. It is another 2 days before the refugees can return to their homes.

Passing the damage wreaked on her village, Celine tries to remain calm. Some houses still stand, the brown stain of the flood, chest high on the walls. But reaching her plot she gasps. A thatched roof leering out of the mud is all that remains. The logs for the fire, carried by the retreating water have smashed the uprights of her home, crippling the structure. Everything inside is gone. 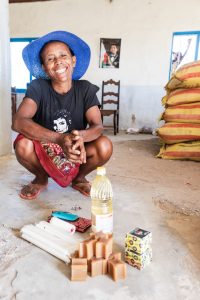 When we meet with Celine at the distribution of food, essentials and planting seed, she is obstinately positive. She explains that her life is here in Mangabe and she will not abandon it. She is determined to rebuild and with the donation of food from HoverAid there is a chance to earn some money by selling fish that will pay a carpenter to construct a temporary shelter from the ruins of her home. With a good onion harvest, there will be enough to finish the house and welcome back her foster children – who have been taken to stay in the capital while the situation is dire.

She sends a personal thank you to the workers and supporters at HoverAid for caring about her enough to act.