Our heart goes out to Katalina and her family – please help us support families who have lost so much. 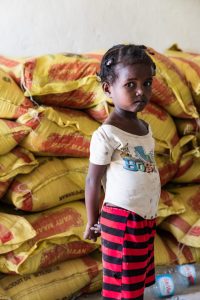 A man’s name is called outside but it is a young girl who steps timidly into the district office. She explains something in a low voice and is brought over to a table where she signs “Kalatina” in loopy French script next to her father’s name.

She has come to collect the emergency supplies that HoverAid is distributing to the thousands of families devastated by the floods along the Betsiboka River in northern Madagascar.

She has made the journey across the river alone. Her father cannot attend himself. He is burying his youngest daughter who died hours earlier from an infected wound sustained during the flooding. 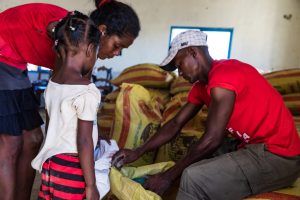 Kalatina makes to lift the sack of rice and emergency provisions, but Toki – a HoverAid worker – stops her. Announcing Kalatina’s hometown to the crowd gathered outside the distribution room, two young men step forward. They come from the same village and offer to escort Kalatina home in time for the burial.

The flood has taken so much away from so many. With your generous giving we are able to offer a route towards recovery. It will never replace what is lost but it is nevertheless vital. Thank you!