The programme of Madagascar Medical Safaris (MMSs) for 2020 has just started, with the first two taking place in Sahakevo and Ampasinambo, on the Eastern side of the island. In this region 99% of the population are farmers, of rice, sugarcane, coffee and beans. 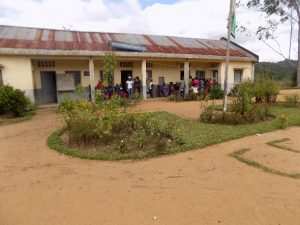 They weren’t affected by the January Floods which destroyed many communities around the Betsiboko in the North West, but this doesn’t mean that life is easy. 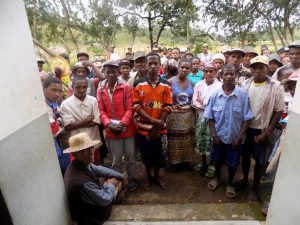 These two MMSs used planes, piloted by our partners Mission Aviation Fellowship (MAF). Ongoing rains, although not enough to cause extensive flooding, made landings difficult, resulted in some delays. The Sahakevo MMS was completed, but Ampasinambo was different.

The virus arrived in Madagascar last weekend. This part of the world has so far been spared this new virus, which has become a pandemic globally. So far 19 cases have been confirmed, in the capital Antananarivo, 12 of whom were passengers on a single incoming Air France flight. It’s likely there are many more cases, and a campaign has been started by the government with mobile teams, together with WHO and UNICEF.

In the densely packed city it will spread fast, but once it reaches the predominantly rural communities elsewhere things will be even worse. Minimal healthcare or understanding, and fear of an unknown disease will have a devastating effect, even beyond actual physical cases.

The Government has advised a voluntary lock down for the Analamanga region around Tana and Toamasina. All public transport, urban and national, is prohibited. All international flights in and out have now been banned. Cruise ships are not permitted to berth in Madagascar’s ports.

On 21 March the Government of Madagascar declared a Health State of Emergency. Restrictions now include the closure of all schools and universities, administrative offices, churches, event spaces, bars and restaurants. All sporting fixtures and cultural events are cancelled. Public transport has been halted and sanitary checks have been established at exit points from Antananarivo and other major cities. A curfew is in place from 20:00 to 05:00.

Madagascar’s central bank said on Tuesday it had injected 420 billion ariary ($112.2 million) in March into the banking system to help it cope with the Coronavirus epidemic.

The near lock down has consequences. The majority of the population will not be able to buy their daily needs when they go more than a few days without income. Companies are requested by the government to continue paying salaries during this first 15 days lock down. The majority of work is informal labour. Closing bigger companies affects small restaurants for example. Closing public transport affects many driver/owners of taxis and buses. How the government will handle this side effect is not clear. Smaller companies and tourism business have received postponement of paying social premiums and taxes.

The government has just announced a fund to support the most vulnerable. The homeless are put in centres, people who lost their income due to the restrictions, eg taxi drivers etc may get some support from this specific fund.

Impact on HoverAid and our response

The HoverAid team who have been working in the flood region in Ambato Boeny were luckily back at our Tana base in Antananarivo for some much needed rest and recuperation. Their departure back to the relief and rebuilding work has been postponed until the position on travel, and associated permissions amidst the restrictions are clearer. This is delaying critical activities, as they recently discovered villages in that area previously unreached since the January floods in dire need of help and supplies. 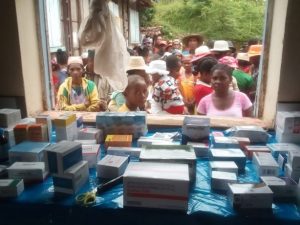 Peter Van Buuren is currently working through how HoverAid can best help with the Coronavirus response. On Tuesday 24th March he met with SALFA, associated with the Madagascan Lutheran Church and running 50 health clinics all over Madagascar, to see if we can collaborate. Like many agencies, SALFA are in need of transport and money. Their plan is to distribute soap and additional food in the regions where they are active. We will be helping them getting soap, and of course transportation and Peter is awaiting their information on where the need is.

We have authorisation to drive in Tana, and one of our vehicles is being given permission for the whole island. There is no public transport.

There are still two MMS doctors in Tana who returned yesterday from the MMS in Ampasinambo. We can provide documentation to allow them to travel. We’re trying to find a solution so that the team can return to Ambato Boeny, and for the distribution SALFA is planning. It’s a complex situation where no one really knows how to handle the situation. 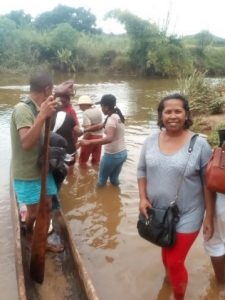 We carried out the first MMS in Sahakevo last week, and moved on to Ampasinambo this week. We then found out about the Coronavirus, making the team anxious, stressed, and fearful of all being stuck in Ampasinambo. Unfortunately we could not finish the mission, due to imminent travel restrictions. On Monday morning, I called MAF to ask them the schedule for our return, they said that the flights will be cancelled, and they needed a special authorization to pick us up, hopefully the following day.

We stopped the mission on Monday afternoon and prepared our return. All this with the worry of not being able to return to Tana. On Tuesday, we had already arrived at the runway around 6 am; the plane arrived at 8:45 am. He made 2 trips with a stopover in Sahakevo because the authorities of Marolambo did not allow us to make a stopover in Marolambo.

Everything is changed because of Coronavirus. We still had a lot of patients. Malaria is the most dangerous disease in 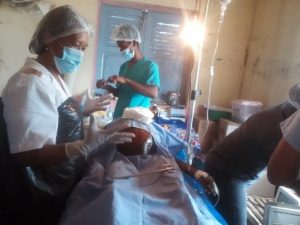 Ampasinambo; most of the patients are children under 10 years of age. Since our arrival, we have hospitalized 10 children who are already in critical condition. Among them, 2 died, the other children are still in the hospital.

How you can help

Our colleagues and fantastic medical volunteers in Madagascar, who are already fully occupied with ongoing work in the North West following the Floods, as well as a full programme of MMSs, will now be stepping into the fight against a deadly new virus. Our unique access to hard to reach communities (except for a new virus), and position delivering front line healthcare and education in hygiene and building resilience in the absence of any other support means that the HoverAid teams will be at the forefront. 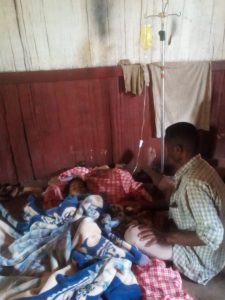 Your support in prayer, and donations, is more crucial than ever.  Thank you