Our departure for Marolambo was delayed by 3 hours because of bad weather, there were a lot of clouds and we had a hard time landing too, but thank God we arrived safely.

When we arrived, it was raining heavily and it was very cold, but that didn’t stop our team from installing equipment and making the surgery ready for patients. 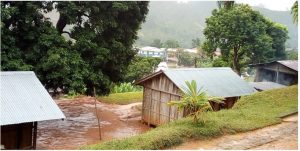 For this mms, the municipality made a great effort to raise public awareness to join our team at the hospital despite the bad weather, which is why we received many patients. As usual, we started the mission with a religious service led by the pastor sent by the NGO MAF, all this in the rain.

We did a somewhat urgent caesarean operation because the baby is already full term, but the mother had not yet had a contraction. in another similar case we offered a caesarean, but the mother wanted to give birth normally.

We saw a 3-year-old child, he has a health problem which we do not know, his head is normal according to his age but his body is not developing. He needs to do a CT scan and medical check-up to detect his problem if we can afford it. He can’t walk

The most consulted illnesses are the flu, cough, hypertension. For the children, there are many cases of malnourishment. Life has become very difficult there after the passage of cyclone Batsirai, the crops are all destroyed, it was very difficult to find vegetables and they are very expensive; we bought a small tomato at 500 ar per piece, a kilo of carrots is at 7000 ar ( = £1.40). This compares to the poverty level in Madagascar, where 71% of the population live on less than £1.58 per day.