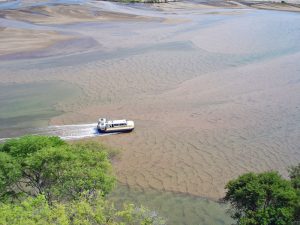 Hovercraft can get to places other vehicles can’t.

Hovercraft are simple and versatile go-anywhere craft  capable of operating over water, ice, mud, sandbanks, and up and down small rapids. They can operate along weed and reed filled waterways where propeller driven boats would become fouled, and over short stretches of land or in water that is simply too shallow for other boats.

Hovercraft are not the answer to everything – if you can use a boat or a truck then that’s probably the right thing to do, but where the water is too difficult for a boat, or the ground too soft for a truck, a hovercraft may be perfect. 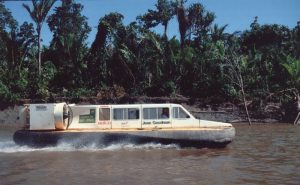 Once a hovercraft is moving over water it makes very little impact on the surface as, unlike a speed boat, the weight is evenly distributed over a large area – the faster a hovercraft goes, the less wake it produces! Hovercraft are quiet too – far less noisy than a helicopter. Believe it or not, it is not unusual for birds in Madagascar to fly alongside the hovercraft in formation!

With the onset of global warming, extreme weather events are increasing. Places which have never experienced extreme rainfall, are being flooded for the first time, and areas prone to floods are at greater risk than ever before. Flooding is a major global relief issue – particularly when there are hurricanes or cyclones, which destroy homes and communities.

Hovercraft are particularly useful in flood relief work as they can operate over any water surface, regardless of what is submerged beneath. They can also travel over mud, and move over short stretches of land between flooded areas.

It is likely that at some point in the future, hovercraft will be regularly used in flood relief because, quite simply, they are the right vehicle to use.

HoverAid aims to standardise the use of hovercraft in flood relief situations as soon as possible, by presenting the arguments in favour of using hovercraft in such situations, to major aid and relief organisations.

Marginalised populations living in areas prone to seasonal flooding, or in swamps or mangroves, wetlands, or areas where rivers which are unavigable by conventional boats, provide a potential, but unexploited transport route, but are, by their very situation, unlikley to make it into the headlines.

In some cases, due to their remoteness, these communities live beyond the radar of much of the aid and development community too.

In this age, where travel to distant shores and continents has become almost mundane, it is wrong that those who live in the more difficult to reach parts of our shared planet, should be overlooked and ignored.

HoverAid aims to bring these populations to the attention of the aid and development sector, and argues that by using hovercraft, regions that were deemed inaccessible need no longer be considered so.